In this second section, I wanted to talk about functions… And how to take simple movements and build more complex animations from them. Be warned: Here be graphs.

We'll be using the idea of State, Update, Apply from Part 1 here too. If you haven't read that, you might want to start there!

And finally, all of the animations are running in javascript canvas, so you can open the source code in the inspector or find it on my github for the site!

How to make this?

For the State, we can just have a single number that varies from 0 to 1: The percentage through the animation we are so far.

This means our Update can turn the elapsed time into a percentage value and add it to the State.

And our Apply can move the ball based on the state variables, and draw it. For this, we only need to change the y coordinate:

y = state*k, where k a scaling value for how far the ball moves.

The update line can be a bit confusing, but might make more sense when split up a bit more.

We're working out how much further we are through the animation (```dPerc```) which is our change it time divided by the duration of the animation. Say our animation is 2 seconds long, and 1 second just elapsed… We're now half-way further through than before.

It might be helpful to think of the shape this variable (or all variables) make over time. A lot of these animations can be thought of as the Apply function reshaping the State variables.

Figure 1: The shape of _animationPerc over time, where d is the duration of the animation, makes a sawtooth shape.

In this example, our Apply function just scales the State by _dist. This is then the y offset of the ball for that frame, as shown in the animation above. 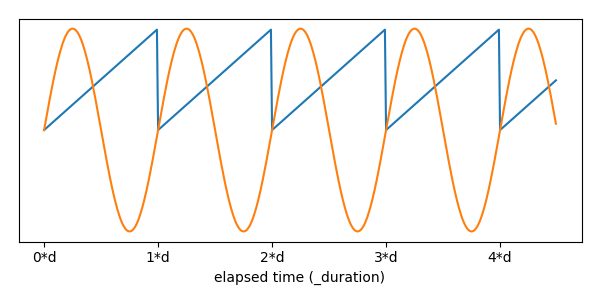 Figure 2: Here, the input State (Blue), is scaled to give the ball's positional offset by the Apply function (Orange).

By just changing the Apply function here, we can get a variety of different movements. We can think of these movements as transformations of the origional State graph, since this is the only input.

In code, this is as easy as:

By doing this to both the x and y axis at the same time, offset by a bit, we can get a circle!

Which, again, in code is just:

This idea can be taken much further, and leads to some really cool movements! The Lissajous Curves are created when you scale the x and y parts differently in a way very similar to above ^. That's a whole different blog post though!

Figure 3: The different shapes that can be made by scaling the inputs to sin/cos into different ratios. If these were animated like the ball above, the ball would follow the shape.

This is a slighly harder example for the idea of manipulating function shapes.

We start off with our input shape as before… And keeping in mind our goal output shape (to get the animation above).

We can perform several steps to transform it into the right shape… Scaling it up by 2 and moving it down by 1 (Orange). Then we can take the absolute value of this (Green). 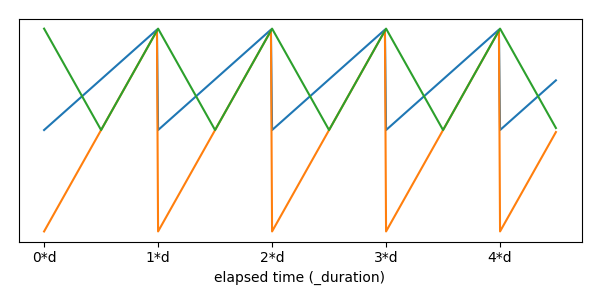 In order to create a realistic bounce, we have to first construct the right shape function again. Without delving into the physics of it, we're looking for a Parabola: Some function of \(t^2\).

Interestingly, we can get this shape from our zigzag before, by applying an extra transformation: 1-zigzag2.

We can clamp zigzag so it's 1 for some time, which means the ball will sit on the ground for a bit… By animating the scaling too, maybe this could be an animation for a slime NPC?

Figure 7: Basic zigzag curve (Blue), zigzag/0.8 and clamped between 0 and 1 (Orange), and finally the output shape - bouncing ball with a pause (Green).

And how it looks animated…

And also we can have loads of balls by just adding an offset for the State value to each one! With some polish this could maybe make a kind of snake creature for a game…

While here, I've only done animations by moving things, it's also possible to animate rotations, shaders, skeletons, and more with exactly the same ideas.

Tune in for part 3 when I'll cover a more complicated idea: Using gradient descent for solving constraints in procedural animation (but with fun interactive animations!!).