This is the first in a 3 part series on procedural animation, all taken from a talk I gave in January of 2019. The posts ramp up in complexity, and I've tried to make the animations interactive where possible!

All of the animations are running in javascript canvas, so you can open the source code in the inspector or find it on my github for the site!

This is the core of how I approach these animations. I find it's helpful to try and break down the system into 3 parts - State, Update, and Apply. These systems can very easily become hard to tweak and work with, and this is just one tool that might help with that.

Each part can be thought about separately, and by moving the state into a clear separate variable the system becomes much easier to reason about. Animations won't go out of sync, and it's to debug as you can just view and edit the state directly.

Anyway… Lets look at an example!

State machines are one of the simplest forms of procedural animation. The idea is there is a single 'state' we're in, and also a set of rules for why/ when we change state. State machines are often used in game AI - where states might be { Defend, Rush, Flank }, or for a character: { Falling, Walking, Sprinting, Attacking }.

We can view the state and the transitions as a graph, where the arrows denote probabilities. 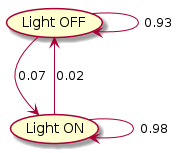 And finally, our Apply section simply determines if we should draw a circle that frame, or leave the frame blank.

Tune in next time for some more interesting examples!